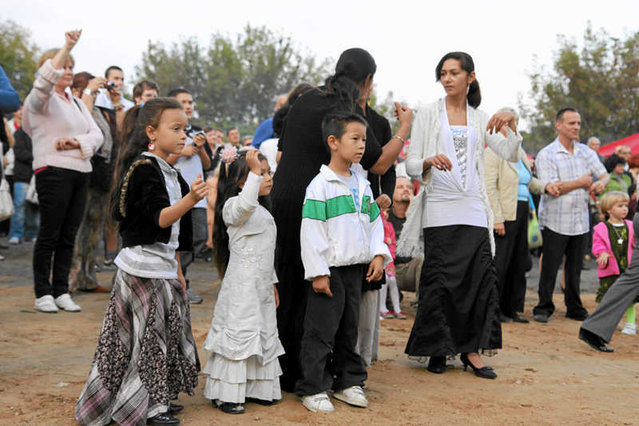 The Romanies, being Europe’s other cursed nation, along with the Jews, have struggled with widespread anti-Gypsy practices and beliefs for hundreds of years now. Even though, like every other nation, they have committed their sins, still a stop needs to be put to the racism which is as common in Germany, Russia and Poland as it is in other countries of the old continent. It is time to bury the hatchet and forget the prejudices arising from history. Combating general discrimination is an ongoing challenge for the European Union. In the 21st century, the old continent should be setting an example of tolerance and friendship in a multicultural world.

Today, they are unwilling to refer to themselves as ‚Gypsies’. They prefer the relatively new designation of ‚Romanies’. And not because the former name also encompasses other ethnic groups, such as the Sinti, the Balkan Egyptians and the Ashkali. As Joanna Chojnacka, the Secretary of the Union of Polish Romanies [the ZRP], says, ” ‚Gypsy’ has bad connotations, because there are so many sayings along the lines of: idle as a Gypsy, or The Gypsy don’t sow. The Gypsy don’t hoe. Where the Gypsy’s eyes go, It’s for him the crops grow, or to lie and loiter like a Gypsy, and so on. Terms like: Gypsy music, Gypsy night, Gypsy Festival are still in use, but to us, ‚the Roma’ sounds better.”

There is no need to look far in order to confirm the scale of discrimination against ethnic minorities in Poland. Describing her attitude toward the Romanies, Bożena, a 56-year-old resident of Łódź, claims, „When I lived in the country with my parents, the Gypsies used to come by in their caravans. They washed in the river, stole our hens and they also sold all sorts of stuff. I’m not surprised some of them made themselves such a fortune! And the Poles were so poor! They still are!” The prejudices from down the years, still alive and kicking in public opinion, prevent not only adult Romanies from living a peaceful life, but also their children.

Asked about the education of young Gypsies, Joanna Chojnacka stated that „the majority of Romanies at any rate send their children to primary school. Most of the girls finish their schooling at that level; however a higher and higher percentage of the boys continue their education. In schools where there are large numbers of the ‚aliens’, the head teachers carry out racial segregation and establish separate classes for the Romany children. This year’s prohibition on such practices will lead to the abolition of apartheid in schools within the next two years. Moreover, the Ministry of National Education has also banned the practice of sending these youngsters to special schools on the basis of their poor knowledge of Polish.

As regards Higher Education Institutions, the ZRP secretary informed us that the association for which she works „pays 53 student grants. It’s a very insignificant number and most of the recipients come from mixed, Polish-Romany marriages.” Apart from these rare cases, after a few years schooling, the overwhelming majority take up a trade, or find work selling goods, or in entertainment. In the last resort, they remain unemployed. As a result of this state of affairs, 75% of the Poles surveyed by the Centre for Public Opinion research [CBOS] acknowledged that if the Romanies were really to begin working, their problems would disappear and, following on from that, so might the discrimination against them. At first glance, our compatriots’ opinion seems fair; however, it arises from an unfamiliarity with Gypsy traditions and customs.

Anti-gypsy attitudes are also grounded in this particular minority group’s relatively low level of assimilation into society in general. Today, changes are taking place somewhat more quickly, but, as Joanna Chojnacka says, „Romany integration depends on where they live. If they live in a cluster, like in Małopolska, the cultural diffusion is weaker, while if they live in cities among Polish families, then they try to assimilate with the outside world to a certain extent.” However, nowadays, the most influential factor in social homogenisation is the widely-embraced pop culture, which supersedes both the traditions and language of the minorities.

Another type of discrimination which continues to exist is what might be dubbed a ‚stealth’ approach; administrative formalities which are simple matters for Poles succeed in being no small challenge for the Roma. This is mainly occasioned by prejudice toward ethnic minorities and effectively complicates their everyday lives. The orthodox stereotypes held in society’s consciousness force the Romanies into a daily struggle with thousands of problems and manifestations of antipathy and suspicion. The old saws are still alive; „Escape like a Gypsy on a stolen horse”, or „A Gypsy tells the truth but once in his life. And even then he lies.” And even if the authorities satisfactorily overthrow racism across the land, the well-known sayings will live on for tens, if not hundreds of years.

Xenophobia, so very menacing toward an ethnic minority in Poland, does, however, have its historical basis. As a nation oppressed for many years, the Poles learned to live under arduous conditions and to count on no one but themselves. In addition, nearly forty years of Real Socialism instilled a resentment in our compatriots toward the wealthiest and poorest classes. And, as ill-luck would have it, the majority of Romanies occupy one or other of these positions in the social hierarchy. In the words of Brazilian writer, Paulo Coelho’s, protagonist, „If you ask anyone at all what they think about Gypsies, they will answer without reflection: They’re thieves and swindlers. Even if we were to try most strenuously to lead a normal life, even if we were to settle permanently in one place and carry our ID cards with us, there’s no cure for racism.” Let’s hope he was mistaken.